In 1967, ICAS was founded in the lobby of a Milwaukee hotel when a handful of air show industry professionals recognized the need for an organization to protect and promote their interests in the growing North American air show marketplace. From the beginning, the group recognized the need for standardization of industry practices in key areas such as safety, insurance and the manner in which the industry interacted with government and military officials.  By the summer of 1976, the group had incorporated in the State of Wisconsin, “…to provide information to air show sponsors and pilots; to promote safety at all aviation events; and to work with government agencies to develop air show safety standards.”   Although the annual ICAS Convention quickly became the center of much of the organization’s yearly activity, the organization has since become the recognized world leader on a wide range of air show-related issues, including safety, regulatory concerns, industry standards and best practices, interaction with the military, and professional ethics.   Today, the International Council of Air Shows is dedicated to building and sustaining a vibrant air show industry to support its membership. To achieve this goal, ICAS demands that its members operate their business at only the highest levels of safety, professionalism, and integrity.

The Fighter Pilot Podcast is a thrice-monthly internet radio show that explores the fascinating world of air combat: the aircraft, the weapons systems, and—most importantly—the people.

This is the Official Website of Del Laughery, Author of the Boneyard Almanac. If you’re an aviation fan, an ex-military pilot, or in love with history, the Boneyard Almanac series will provide a highly pictorial perspective that few ever get to experience first hand. . Boneyard Almanac provides a look at the phases of operations at AMARG as well as the boneyard’s connections with the USAF Museum and the Pima Air and Space Museum as part of the greater story of what happens to old, unwanted warplanes. 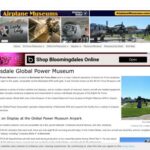 The Global Power Museum is located at Barksdale Air Force Base and is a major national repository of historic Air Force airplanes. It is free and open to the public, accessible via the Barksdale AFB north gate. It was formerly known as the 8th Air Force Museum until 2012.

The Titan Missile Museum is the only remaining Titan II site open to the public, allowing you to re-live a time when the threat of nuclear war between the U.S. and the former Soviet Union was a reality. At the Titan Missile Museum, near Tucson, Arizona, visitors journey through time to stand on the front line of the Cold War. This preserved Titan II missile site, officially known as complex 571-7, is all that remains of the 54 Titan II missile sites that were on alert across the United States from 1963 to 1987.

Featuring about 400 historic aircraft, from a Wright Flyer to a 787 Dreamliner. Sitting on 80 acres m exhibiting around 400 aircraft the museum opened its doors to the public in May of 1976. Over the past forty years, the museum has grown immensely and today encompasses six indoor exhibit hangars (three dedicated to WWII). Michelle “Mace” Curran grew up in a small town in Northern Wisconsin and, believe it or not, was a super shy kid. From Mace’s  humble beginnings, the importance of hard work and encouragement to chase her dreams was bestowed upon her  at a young age. Always a thrill seeker, the desire to seek out something greater drove Mace to leave her small town and join the military. This structured and challenging environment allowed Mace to thrive and she  rapidly focused in on becoming a fighter pilot as my ultimate goal. Years of work focused on this singular goal culminated in the night Mace found out she would be going to fly F-16s. From Asia, to Europe, to the Middle East it was one unforgettable experience after another. The challenges were tough, but the rewards were greater. The pinnacle of Mace’s  career, and what led her here today, was the last 3 years of her career as a Solo Pilot for the Air Force’s elite demonstration squadron, the Thunderbirds. Mace served as only the second woman ever to fly in the Lead Solo position, since the team began in 1953. The honor of serving in this position empowered Mace to do whatever she could to inspire others. When asked about the best part of the job people are often surprised when Mace’s answer does not involve the flying. While challenging and exciting, it was nothing compared to the feeling of knowing you are inspiring someone to chase their dreams. As my time on the Thunderbirds came to a close Mace  sought out ways to still leave this impact on others, and here we are!  Mace has many stories to tell and weave into them lessons of grit, perseverance, determination, and teamwork. Please visit Mace’s Website as she is one of the Air Force’s best and would like to inspire you. Check out her Website!

In the spring of 1943, the 390th Bomb Group (H) was activated in Blythe, California with four squadrons: the 568th, 569th, 570th, and 571st. In July, the Group’s air and ground troops were assigned to the 8th Air Force and dispatched to Suffolk, England for missions over Europe. The 390th‘s B-17 Flying Fortresses bombed aircraft factories, bridges and oil refineries. A total of 714 airmen sacrificed their lives in the cause of freedom.

The International Council of Air Shows is a 501(c)(6) not-for-profit trade association of professionals inspiring air show audiences worldwide. ICAS is the hub of the air show industry, a centralized network that allows air shows and performers to work together and in tandem with military/governmental authorities to establish and enforce standards that truly define the business.